The Carl-Schmitt-Society maintains the memory of Carl Schmitt in the sense of a historical-critical accompaniment and primarily publishes unpublished life testimonies and documents. The society emerged in 2010 from a Carl Schmitt “Förderverein”, which was formed in 2007 with the support of the town of Plettenberg.

10 March 2022
The Society displays important corrections and additions to the Carl Schmitt literature in a separate section.

Index of published Letters to and from Carl Schmitt

21 March 2022
In addition to the publications of complete correspondence with specific persons, there are numerous individual publications that are systematically recorded here for the first time. 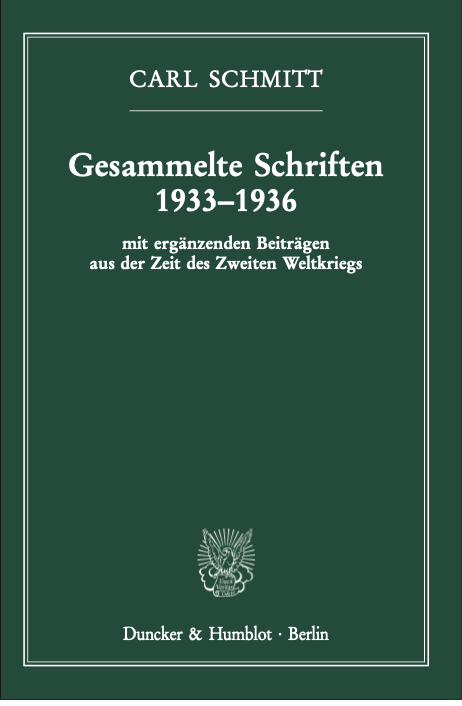 with additional contributions
from the time of the Second World War

On 24 March 1933, the Reichstag passed the law “Zur Behebung der Not von Volk und Reich”, the so-called Enabling Act. The fundamental rights and the parliamentary form of government of the Weimar Constitution were thus suspended. The dictatorship began to establish itself. The constitutional and international law expert Carl Schmitt, who until then had fought for his version of a rescue of the Weimar constitution through a national presidential system, reacted with one of the most notorious about-turns in political thought in the 20th century. Until 1936, he developed extensive journalistic activity to underpin the Nazi regime in terms of state and international law.

This volume documents these treatises written during the first four years of the Third Reich by the jurist Carl Schmitt, who was as controversial as he was influential worldwide, and thus places the ongoing discussion about his collaboration in the consolidation of National Socialist rule on a secure source basis. Included are the dependent essays and articles published during this period as well as the monographs “Das Reichsstatthaltergesetz”, “Staat, Bewegung, Volk” and “Nationalsozialismus und Völkerrecht”. The volume is supplemented by several titles published after 1936 that are not available elsewhere. The volume concludes with notes on individual writings and a bibliography of all Schmitt’s works from 1933 to 1944.

Further information and instructions on how to order the book from the publisher Duncker und Humblot.

The fourteenth annual issue of the Plettenberg Miniatures has the theme “Hamlet as a mythical figure of the present”. The English scholar Andreas Höfele has compiled the context on the basis of Carl Schmitt’s notes on his lecture of the same name on 12 January 1957 at the TH Aachen and commented on the individual notes, some of which have been transcribed from Gabelsberg shorthand. With this text, Carl Schmitt concluded his many years of interpreting the myth of Hamlet.

The 14th Annual Edition can be ordered from the Carl Schmitt Society at the price of 10.00 EUR plus 2.00 EUR shipping and handling.

Overview of annual editions to date

Schmittiana. New series. Contributions to the life and work of Carl Schmitt 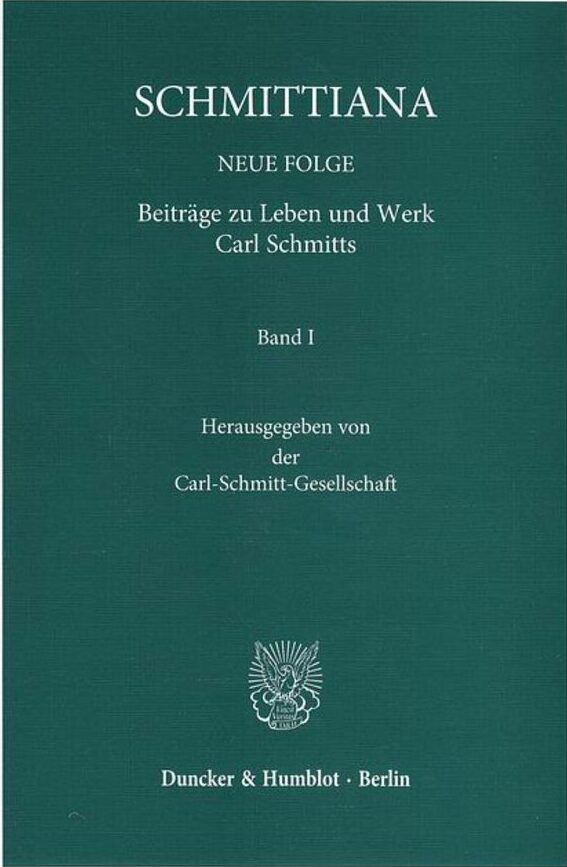 Orders can be placed with any bookshop or directly with the publisher.

The constitutional and international law expert is one of the most influential German scholars of the 20th century, is receiving increasing attention worldwide today and is considered a classic of political thought. At the same time, his work and person have been “controversial” for decades. For many, this adjective is the only possible common point at which they can meet. Some consider the statement euphemistic, others disparaging. Here, for those who are born later, the maxim of Thomas Nipperdey in assessing Carl Schmitt could be “to give back to past generations what they once possessed, just as every present possesses: the fullness of the possible future, the uncertainty, the freedom, the finitude, the contradictoriness”. In this sense, the Carl Schmitt Society offers an interested public access to his work, person and contemporary history.